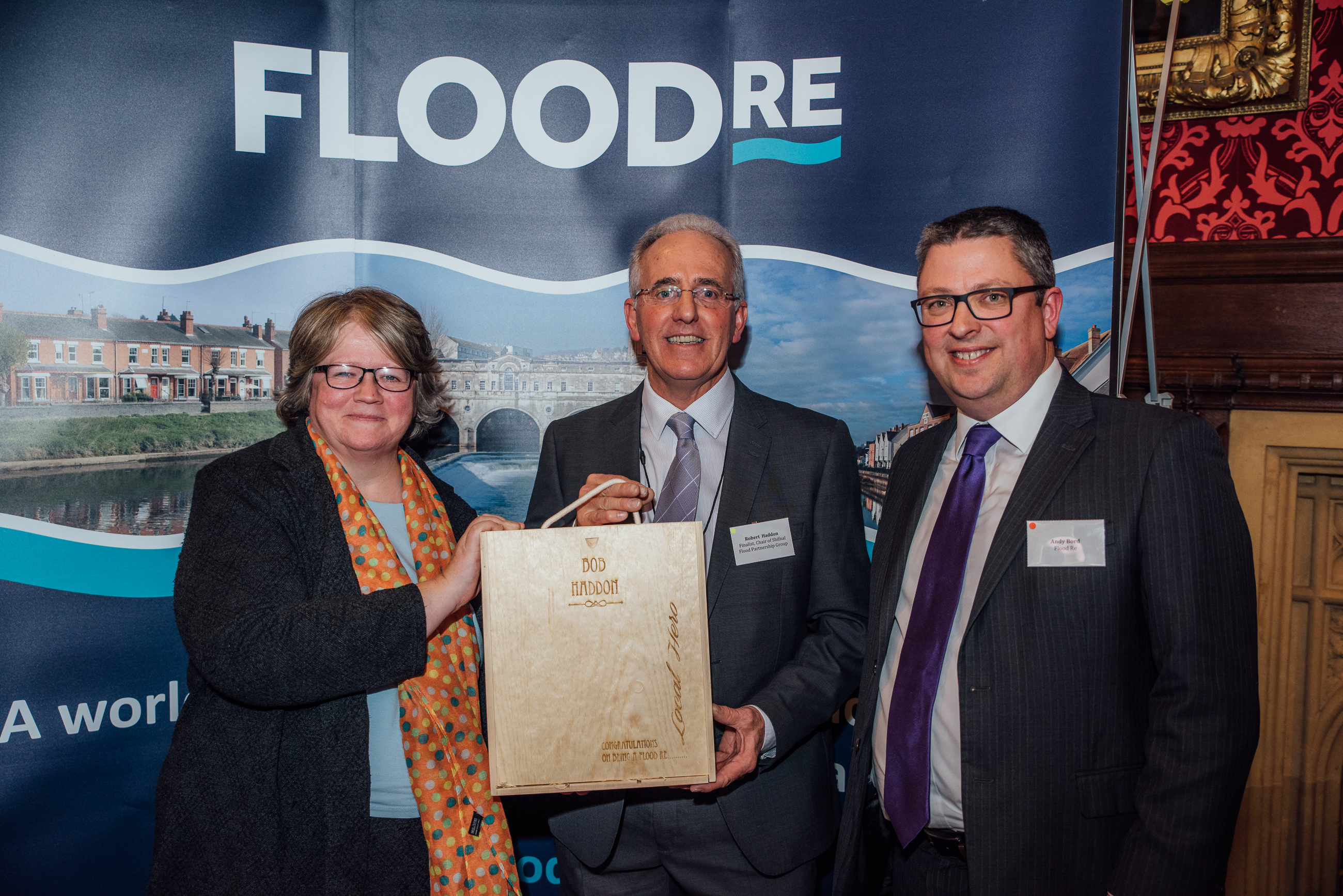 Sponsored by NFU Mutual and Covéa Insurance, entries about Local Heroes were submitted for the chance of winning a £10,000 community grant for flood defence measures. Whittled down to five finalists and one winner, Bob Haddon, one of Flood Re’s Local Heroes finalists shares his story:

Recognised and commended as Chairman of Shifnal Flood Partnership Group (SFPG), Bob Haddon has been involved with SFPG since its inception in January 2014. In just under four years, Bob has led the group from a handful of residents to a significant community presence, with SFPG now advising Shifnal Town Council on flood resilience measures.

Bob was initially inspired to join the flood group when the Wesley Brook burst its banks in 2007, flooding 60 properties:

“I’ve lived in Shifnal for 21 years and was unfortunate, like many others, to have suffered the consequences of severe flooding in 2007 with my family and I having to move out of our home for 15 months.”

When Shifnal was struck by flooding again in 2014, Bob decided something had to be done:

“When I was approached with the idea of Chairing SFPG, I decided the time had finally come to make a long-term commitment to Shifnal, a town I have grown to truly love and care about. Having been through the distressing experience of flooding, I felt I’d stood by and watched for long enough while various organisations and individuals talked about flooding issues in Shifnal. Not a great deal of action had taken place and it was the perfect time to get involved.”

Without funding, SFPG has enlisted the help of an expert consultant to develop an integrated flood resilience plan for Shifnal, which has since been progressed by Shropshire Council. The full plan involves significant long-term investment and is seen by SFPG as a goal towards providing a flood resilient solution for the town.

From the outset, the group was keen to develop strong working relationships with influential organisations, including local councils, building developers, the Environment Agency (EA) and Severn Trent Water:

“Since launching SFPG I’ve believed in the importance of links with all organisations, agencies and other interested parties. There is, and has been for some years, a substantial amount of development across Shifnal and its water catchment area. It’s therefore paramount for us to debate and challenge all areas of concern with regard to Shifnal’s flood risk, and do our bit to prepare the town’s changing face for the inevitable consequences of flooding.

“The purpose of SFPG is not necessarily to stop development but to ensure that all the mechanisms are in place so that there will be no greater impact on our town during heavy rainfall events for current and future properties.”

The tireless efforts of SFPG has seen group members invited to present at two National Flood Conferences, before receiving a request from John Curtin, Executive Director of Flood and Coastal Risk at the Environment Agency, to visit Shifnal and see first-hand how the group is working with flood partners.

With Bob at the helm, the most significant outcome of the group’s working relationships has been a funding announcement of £532,000 to help manage flood risk to 87 properties, as part of the Government’s six-year flood risk management programme.

“We are so pleased about the positive support that the organisations are giving us. It’s now our priority to ensure that the funding allocation meets with the needs of our grassroots community and allows those at risk of flooding in Shifnal to be a part of the planning process.

“There is still a great deal of work to do and the more we look into the problems of water management in our catchment area, the bigger the challenge becomes. We have only just started.”

Flood Re is a government backed scheme that can help flood risk victims in villages like Shifnal find more affordable home insurance. If you think your property may be eligible for the scheme, visit: https://floodrearchive.isready.co.uk/homeowner/eligibility/