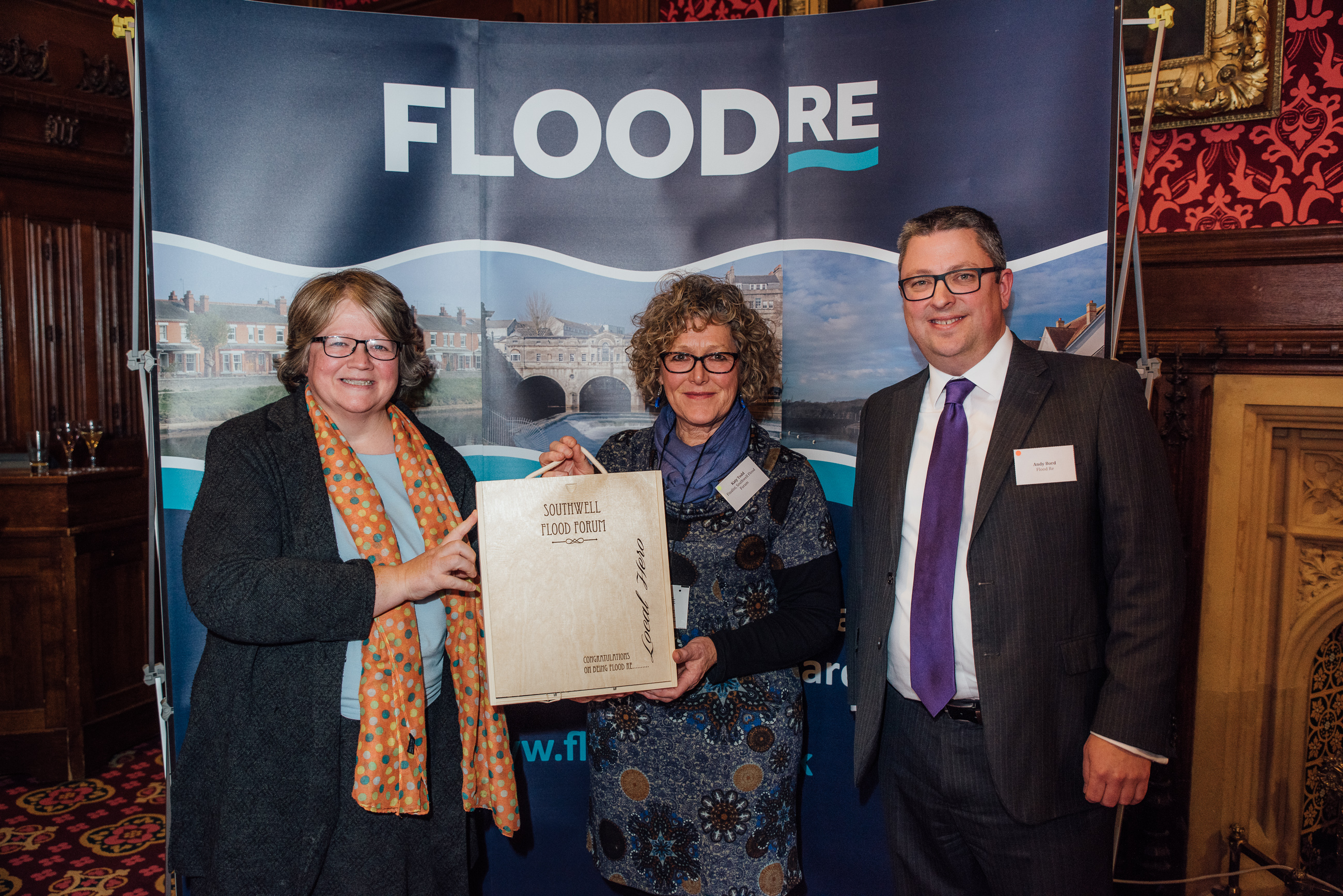 Sponsored by NFU Mutual and Covéa Insurance, entries about Local Heroes were submitted for the chance of winning a £10,000 community grant for flood defence measures. Southwell Flood Forum was one of Flood Re’s Local Heroes finalists and John Cook, a core member of the group shares their story:

Within just six weeks of flooding in their town in July 2013, the group gathered enormous momentum and established the Southwell Flood Fund. Any monies raised for mitigation are held within the Nottinghamshire Community Foundation to enable tax-efficient giving and build a mandatory community contribution towards flood management schemes. Just over a year later, SFF lobbied to have the timescale for the £5,000 Repair and Renew grant extended to include flooding from April 2013. This resulted in nearly 100 properties being able to install property level resilience.

But the future wasn’t always so bright for the historic town. Southwell was devastated by extensive flooding in 2007 and an even worse event in 2013 as resident and SFF core member, John Cook, explains:

“We had unprecedented rainfall and flooding in 2013 when more than 250 houses and 40 businesses were affected. We set up SFF following National Flood Forum guidelines to urge the authorities to take action to reduce the risk of future flooding, help develop and install effective mitigation measures and build a more resilient town.”

Since SFF has been established and thanks to the group’s hands-on approach, six kilometres of watercourses, neglected over many years, have been cleared by more than 100 volunteers, transforming areas to be at far lower risk of flooding. SFF subsequently held meetings to explain to riparian owners their responsibility for continued maintenance.

John continued: “Before Flood Re’s launch, some Southwell residents were experiencing difficulties with claims and insurance renewals. SFF identified a clear need to provide support to deal with their insurers so we organised seminars with local insurance experts who also helped people on an individual basis. 60 insurers are now signed up to the Flood Re scheme, representing 90% of the home insurance market.

“To ensure that flood prevention measures are progressing in every possible way, We also work with flood risk authorities to ensure routine clearance of gullies and drains is undertaken. We also ran a twice-weekly help desk at the local library to deal with residents’ issues and concerns and raise awareness of flood risk and resilience. Subsequently, a Community Resilience Handbook was produced and distributed to every household in the town.”

SFF has been extremely successful championing relationships with its community and key stakeholders. The group works in partnership with Nottingham Trent University, Trent Rivers Trust and the Environment Agency to create Natural Flood Management schemes while also working with local farmers, landowners and biodiversity organisations to improve protection.

Most recently, Therese Coffey, a DEFRA minister, has backed a project to help reduce the risk of flooding in the area championed by SFF. The flood risk management scheme would include a 30,000-cubic metre storage area for Potwell Dyke, which would reduce flood risk to the conservation area. Further mitigation measures would benefit other flood-susceptible areas across the town.

In the face of trauma and devastation, SFF rallied its community to reduce flood risk and make a tangible difference to their lives.

Flood Re is a government backed scheme that can help flood risk victims in villages like Southwell find more affordable home insurance. If you think your property may be eligible for the scheme, visit: floodrearchive.isready.co.uk/homeowner/eligibility/