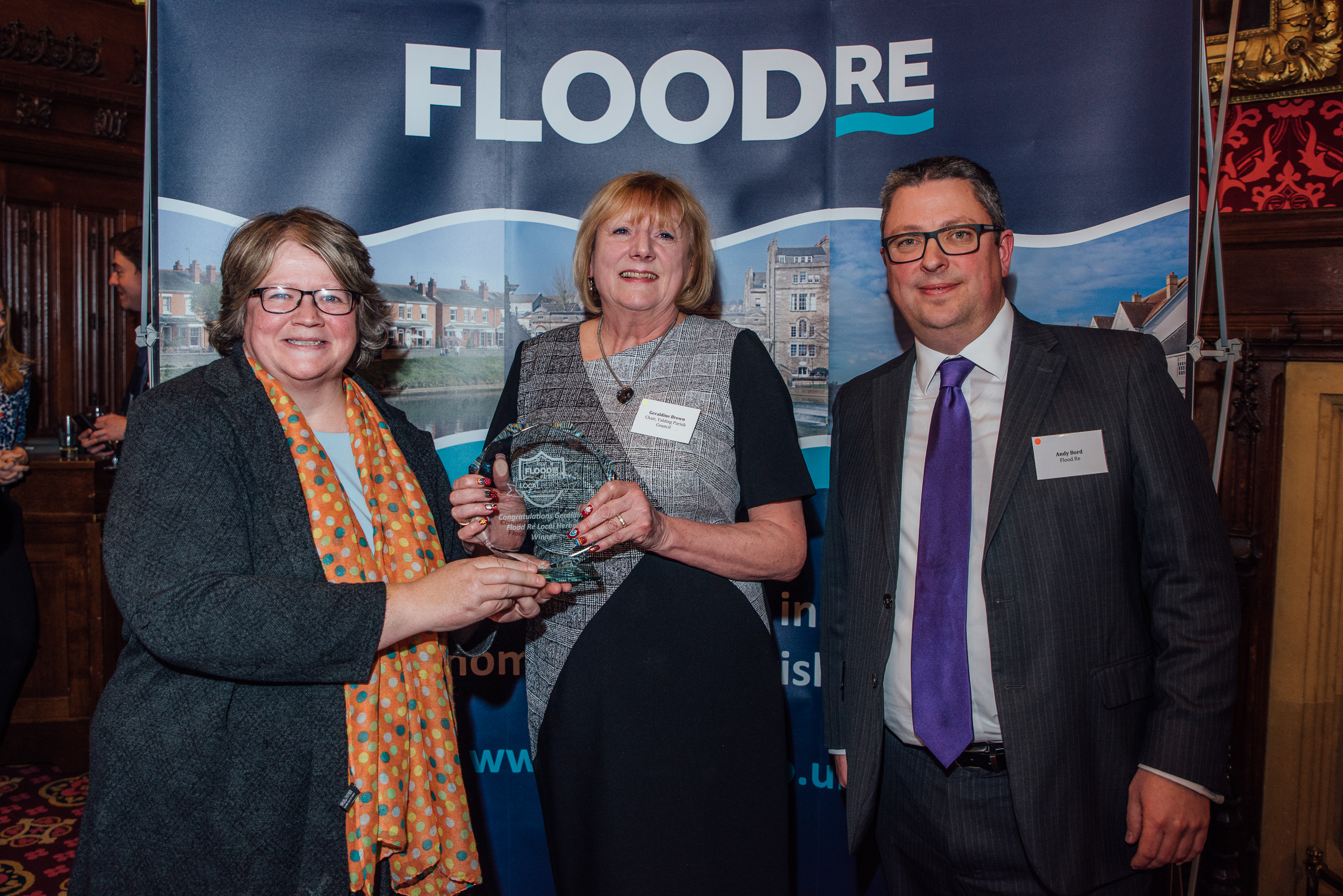 Flood Re has today announced the winner of its Local Heroes award. Geraldine Brown, who lives in Yalding near Maidstone, was chosen by the judging panel as the entrant who most deserved the top prize of £10,000 to go towards her local community’s response to flooding or a local flood relief charity of her choice.

The result was announced by Minister for Flooding Thérèse Coffey MP at a reception in the Palace of Westminster yesterday. The judging panel chose Geraldine as they found her 17 years of commitment to helping her community incredibly heartwarming and believe that her efforts exemplify community spirit.

Yalding suffered devastating floods in 2000 and 2013, and after the earlier flood Geraldine decided to take matters into her own hands. Among other solutions, she set up an emergency contact centre and set up the local church as a refuge. She also sends round-the-clock updates to an email database of around 600 residents during major floods.

Flood Re’s Local Heroes award, sponsored by Covéa Insurance and NFU Mutual, recognises individuals, community groups and local flood action groups that have shown leadership and resilience around flood relief efforts since then. The judging panel selected a shortlist of six, with the fiver runners-up being (in no particular order):

“All of the finalists have demonstrated a commitment, passion and determination to keep their communities safe from flooding that is hugely inspirational.

“Flood Re is vital in enabling everyone to access affordable flood insurance. The Government is investing a record £2.6 billion over the next six years to better protect 300,000 more homes from flooding. If the worst happens, having flood insurance will help households affected get back on their feet as quickly as possible.”

Andy Bord, Chief Executive of Flood Re and Chair of the judging panel, said: “The standard of the entrants was very high across the board. However, we felt that Geraldine was a worthy winner because of the outstanding work she has done for almost two decades, working tirelessly to help the people of Yalding. She is an inspiration to everyone who has to live with the consequences of flooding.

“Geraldine is an example of how, in addition to shopping around for a Flood Re-backed policy, there are many practical steps people can take, working together in their communities to lessen the impact of flooding.

“On behalf of the panel I’d like to congratulate everyone that was nominated. Anyone who selflessly invests time and effort into helping their local community deal with something as devastating as flooding should be recognised and we are delighted to do so through Local Heroes. We are also very grateful to Covéa Insurance and NFU Mutual for their generous support of the competition.”